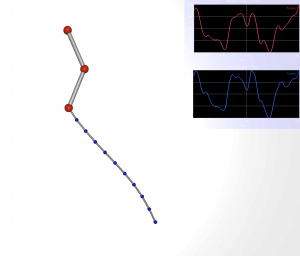 Our research goal is to explicate the whipping action in the words of dynamic primitives – submovement, oscillation and impedance. The reason why whip is compelling compared to other tools is due to its innate complexity; analyzing physics-based model of the whip requires infinite dimensional partial differential equation, and solving this is even challenging to modern super computers. However, regardless of this seemingly-insurmountable complexity, humans achieve astonishing skills at whip manipulation. Instead of suggesting that humans overcome this daunting complexity by internally retaining a mathematical model of the whip, we believe that motor skills for whip manipulation is simply encoded in the words of dynamic primitives. Heavily relying on the simulation program called MuJoCo, this research will establish a theoretical understanding on how humans excel at manipulating complex objects, and this theoretical framework will eventually facilitate robotic manipulation of flexible materials.