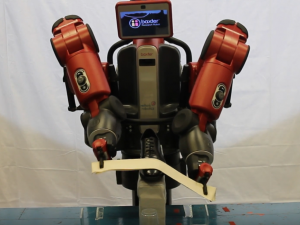 While robot performance has seen huge improvements over the past several decades, humans still vastly outperform them at tasks that involve complex dynamic interaction with the environment. Humans can easily manipulate a variety of compliant and non-compliant objects with two hands, or even coordinate large object manipulation with several other people. One key strategy that humans use for accomplishing these tasks is managing arm impedance (which may include non-linear stiffness, damping, and inertial properties).  In a similar vein, controlling the impedance of a manipulator arm is a powerful strategy for tackling challenging dynamic interaction tasks in robotics. This project involves implementing and superimposing impedance controllers on a 14-DOF humanoid robot, performing system ID to verify controller performance and impedance superposition, and executing complex tasks such as shoe-shining, which involves high-speed dual arm closed kinematic chain cloth manipulation.